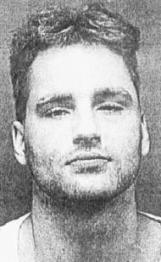 Uriah J. Clouse (b. 1976) grew up in Ellettsville. In 2000, he became a suspect in the Jill Behrman case based on comments he made to several people regarding her disappearance. Clouse's extensive and violent criminal background began as a juvenile, and progressed throughout the years.

In 1992 Clouse was sentenced as a juvenile on charges stemming from an attack on a 19 year old man at Griffy Lake. Clouse and a group of juveniles attacked the man because they believed him to be gay. The victim was pushed into the lake, and Clouse allegedly attempted to hold his head under water in an attempt to drown the man. The victim managed to swim away from Clouse and the other juveniles, and later watched as they slashed all four of his tires. Judge Viola Taliaferro dismissed an attempted murder charge, stating there was no evidence to support that claim. Nevertheless, Clouse was convicted of felony battery and sentenced to boy's school. This attack sparked public outrage and led to rallies being held in support of gay rights and the proposal of a local gay rights ordinance, which was voted on and approved by the city council in July of 1993.

In 1993, after his release from boy's school, Clouse racked up several more charges on violent, sexually related crimes. In November of that year he was charged with molesting a fourteen year old girl and battering another fourteen year old girl. In December, he was charged with raping yet another fourteen year old girl. He was convicted of rape for the December incident in June 1994 and sentenced to 12 years in prison, and as a result of that conviction the charges for child molesting and battery were dropped. However, the rape conviction was overturned by the Indiana Court of Appeals in June 1995. Appellate Judge John Baker of Monroe County based that decision on the rationale that the young victim did not adequately protest the attack. He cited that the victim testified that she told Clouse she did not wish to "have a relationship with him," but did not tell him she did not want to have sex with him, and that could have been interpreted as meaning she merely objected to a lasting relationship. Clouse was freed in January 1996.

In May 1996 Clouse was arrested and charged with felony battery, felony intimidation and resisting law enforcement after attacking a 42 year old woman outside a bar. He was accused of throwing her to the ground and kicking her in the head. He pleaded guilty to felony intimidation and the the charges of battery and resisting law enforcement were dropped. He was sentenced to 18 months in prison and all but thirty days were suspended and to be served on house arrest. In January 1997 though, his suspended sentence was revoked and he was ordered to spend eight months in prison.

In April 1999 Clouse was arrested yet again outside a downtown bar for beating and kicking a woman identified as his girlfriend. He was charged with felony battery, battery on a police officer resulting in bodily injury and attempted battery by bodily waste. During this arrest Clouse threatened to kill the police officer and rape and kill his grandmother, mother, wife and children. He was sentenced to 18 months in prison, and served one day in prison with one year to be spent on probation. However, in June of that year there was a petition to revoke his suspended sentence and he was ordered to spend the remainder in prison.

Shortly after Clouse's release from prison, local resident and Indiana University student Jill Behrman disappeared while riding her bicycle before work in the morning hours of May 31, 2000. Clouse was identified in June 2000 as a possible suspect among investigators based on witnesses who came forward with information that Clouse had told them of his involvement. Investigators continued to investigate Clouse for the next two years for the crime. He wouldn't be officially named as a suspect until March, 2002, when Wendy K. Owings confessed to FBI Agent Gary Dunn that she, Clouse and Alisha T. Evans accidentally struck Behrman while she was riding her bike, stabbed her, and placed her body in Salt Creek. Immediately after Clouse was named as a suspect in that case another woman came forward with information that Clouse attempted to abduct her at an Ellettsville gas station on June 13, 2000, two weeks after Behrman's disappearence. The attempted abduction charges were later dropped in what then Monroe County Prosecutor Carl Salzmann called a "strategic move."

After being named a suspect in the Behrman case, Clouse was charged with another rape stemming from a May 2001 incident. The case was complicated due to the victim's on and off relationship with Clouse, and he pleaded guilty to battery in March 2003. He was sentenced to 1 year in prison, and with time served he was freed in April 2003.

In her confession to investigators, Wendy Owings detailed her version of the events of May 31, 2000. She claimed that she, Clouse and Evans had spent the night before and morning of the crime driving around the area drinking beer and smoking crack cocaine. She alleged that Clouse struck Behrman with his truck and proceeded to wrap her body in industrial grade plastic wrap, securing the plastic around Behrman with bungee cords. She further stated that they drove around with Behrman in the bed of the truck looking for a place to dump her body, ultimately settling on an area at the north fork of Salt Creek. At the creek, Owings claimed the three took turns stabbing Behrman with a four inch, black handled knife belonging to Evans and placed her body headfirst in the water. She later recanted her confession and Monroe County Prosecutor Carl Salzmann declined to pursue charges of murder.

In April 2005 Clouse was arrested for invasion of privacy after a woman spotted him sitting in her car outside her home smoking a cigarette. The woman had a protective order in place against Clouse at the time. He claimed he had just left Class Acts, a now defunct strip club on the south side of Bloomington, was not capable of driving home and wanted to rest. Prosecutor Carl Salzmann declined to press charges on that case. In another case from April of that year, Clouse was arrested after police discovered him passed out on a bench outside the Monroe County Courthouse. He was taken to the Bloomington Hospital where he inappropriately touched a nurse who was drawing his blood on the breast and buttocks. He was convicted of a misdemeanor charge of battery and sentenced to 180 days in jail. 90 days of that sentence were suspended and he was free to go with time served.