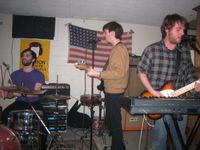 The Statehouse is an underground music venue that was established in Bloomington in August 2007. Founding members of the Statehouse are Bryant "BFox" Fox, Aaron "Aaronious" Boroughs and Josh "Jersey" Greenberg.

==Summary In August 2007 Bryant, Aaron and Josh moved into the Statehouse located at 321 E. Wylie Street. Upon moving in they realized that the house they had signed a lease for was the perfect venue for shows! So, without further adeau they booked their first show and the rest is history. 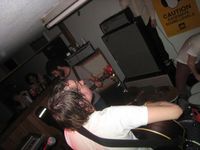 Many notable events have taken place at the Statehouse. Bands from all over the midwest as well as those from across the country have played in the best basement in Bloomington. Local favorites Alexander the Great and Prizzy Prizzy Please have played multiple shows and other bands such as Gravitas and Kentucky Nightmare have rocked out for large crowds many a time.

The most notable event in the short but rich history of the Statehouse has got to be Boomfest. This three day event of music, misogyny and mayhem was the perfect way to induct the Statehouse into Bloomington underground venue lore. Bands from the east coast such as Molasses Tavern, Akudama and Teeth Mountain gave many local kids headaches as well as upset stomaches and uplifted spirits over the course of Boomfest. Aaronious was quoted as saying "what happened ?" after Boomfest concluded. 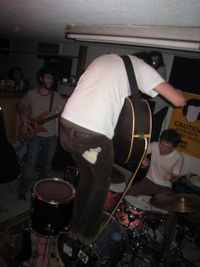 Another notable event in the Statehouse legend was Bryant Fox's birthday. Upon finally turning 21 BFox and the Statehouse pulled off what will go down as the largest show the house has ever seen. On November 10, 2007 Alexander the Great played a mind blowing set... if you were drunk. And over 200+ kids showed up to take part in the festivities. Other bands included Sleeping People (Temporary Residence) from San Diego, CA, Poison Control Center(Ames,Iowa) and also Casper and the Cookies (Athens, GA). At maximum capacity 4 kegs arrived only there was one dillema...NO TAP. With a crowded room full of kids and kegs and no tap, only one man was able to salvage the party and ultimately become a hero amongst average joes. His name was Zachary Woodward. Zach fought his way to the front, through at least 50 kids in a small room in the basement. When asked by those waiting in line for some fresh brew, Zach pulled out a pristine chrome tap and hoisted it into the air. As if the heavens opened up and Satan was vanquished for all eternity, the masses erupted in cheers, high fives, and laughter. The bands finished playing but the party was not quite over yet. DJ Everything Continues (Paul Huett) kept everyone dancing until 4 in the morning when I eventually had to shut down the house. It was epic.

Upcoming Events at the Statehouse

Stay Tuned for more news on the Upcoming Statehouse events

Bands that have played at the Statehouse

If you want your band to play, e-mail us at thestatehouse@gmail.com. If we think you are decent, we might let you play. This is the best of the best (i.e. only what the three of us want). Touring bands: we want to help you get your music to the midwest! If we have openings, there is a pretty good chance we can set you up with a show!