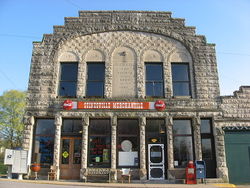 Stinesville is a very small town in the northwestern portion of Monroe County, about 25 miles from Bloomington's downtown. It was founded in 1855 by Eusebius Stine, who owned a sawmill and gristmill there. At its peak, the town had a population of over 700 and included 20 businesses. The population fell dramatically in 1916 when the Hoadley Mill burned down and wasn't rebuilt. The current population is about 200. Only a few businesses exist there now.

A great deal of Limestone is quarried near Stinesville. In the 1890's, quarrying operations nearby included:

From 1998-2003, Stinesville boasted its own gourmet restaurant, the Quarry Diner. It featured dishes such as spinach lasagna and quiche along with breakfast dishes and sandwiches, and also sold original art.

In 1999, Nate Johnson and Mark Krenz started Hardware Recycler in a small warehouse across the street from the Quarry Diner. Despite its failure, they found that Stinesville was a nice place to have a warehouse for an Internet business due to its low property costs.