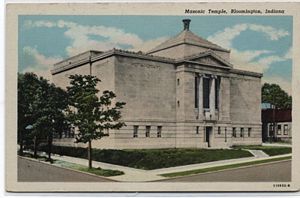 In Bloomington they designed the following building:

It was a large and successful firm with many buildings to its credit in Indianapolis, including the Circle Theater, the Guaranty Building and the Circle Tower all on Monument Circle. They also designed the Walker Theater on Indiana Avenue.

They were active outside of Indiana, as well, including the Flamingo Hotel in Miami Beach, Florida.