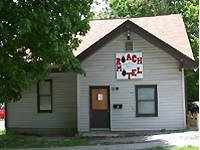 As seen from across Indiana Avenue

The Roach Motel is a famous house in downtown Bloomington, located on the intersection of Indiana Avenue and 7th Street. In the 1970s a group of tenants put a large sign in front of the house declaring it the Roach Motel. The sign stayed for decades. The house is for rental only and not actually a motel.

Kenny Aronoff lived in the house from 1977 to 1981, before joining John Cougar Mellencamp's band. He claims he gave the house its nickname, although resident Deborah Schemenauer claims she added the first sign in the spring of 1981. The original sign is now at the Bluebird.

The Roach is famous for having Shane's World 32 shot partially at the house sometime in 2005. Because of the pornographic nature of Shane's World, this was a major controversy at Indiana University. Several students were expelled for taking part in the video and the university threatened to sue Shane Enterprises.