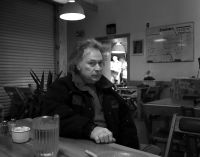 Patrick Fiore (b. 1947) is the part owner of Le Petit Cafe. He was born in Bobo-Dioulasso, Burkina Faso. His family moved to France later where he met Marina Ballor, his wife since April 25th, 1969. He came to the the United States and Bloomington in 1973 on a Fulbright Scholarship in music. He is a percussionist and still owns a drum set which he and his son play sometimes. He became a US Citizen on August 14th, 2001 after being a permanent resident in the US since 1981. He is a dual citizen of France and the United States.

He is described often as a very jovial person and a delight to talk to. He interjects quotes by famous people such as Pascal and his own thoughts.

He is has a collection of French cars, of which he owns 4 Peugeots and 1 Renault, the newest of all is from 1990.

When Tom Donohue died, he took over sole ownership of TD's CDs & LPs.