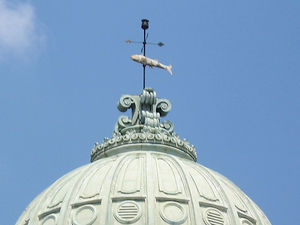 On top of the Monroe County Courthouse there is a fish shaped copper weathervane. It was created by Austin Seward in the 1820s. During renovation in 2007, workers measured the fish to be 5 feet, 6 inches long.

The fish was believed to be created by Austin Seward, although it is unknown whether he created it while he was in Bloomington or if he brought it from the Ohio River Valley. It was placed on top of the cupola of the 1826 Monroe County Courthouse, and on the two courthouses following it.

The weathervane was first gilded in 1884 to improve its appearance.

There are several speculations as to why a fish is put on top of the courthouse when Bloomington is far from most natural lakes or oceans.