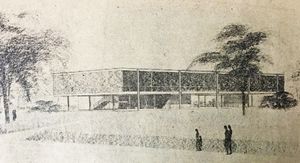 In February 1952 Pi Lambda Phi fraternity announced that it would build a new house at Indiana University in Bloomington based on plans drawn by internationally renowned architect Mies van der Rohe. The project was intended for 714 E. Third Street but ran afoul of city zoning requirements, experienced funding shortfalls and was never completed. The project lives on as inspiration for the design of a new home for the Eskenazi School of Art, Architecture and Design. The new project, called the Mies van der Rohe Building, was approved during the Board of Trustees meeting of August 9, 2019.

The plans for the fraternity house were described in the Indiana Alumni Magazine of March 1952:

"Talk of building and expansion at the University is never-ending. The latest such conversation is headlined by plans of Pi Lambda Phi fraternity to build a preponderantly glass chapter house.

Twitters among the campus population about the vulnerability of such a structure seemed to have ·little effect on the Pi Lams, whose glass will be of extra­ sturdy quality.

Labelled as "America's most unusual fraternity house," the new Pi Lam home will rise on the organization's present Third Street location, directly across from Swain Hall. Demolition of the present house is expected to get under way in April, and fraternity spokesmen indicate that the entire construction job will be completed by September or October.

The building, designed by internationally famous Dr. Mies Van Der Rohe, is to be ultra-modern and functional. Absent in the plans are the 'ponderous walls' and imitation of styles of bygone eras. Dr. Van Der Rohe's chief architectural aim is to design buildings that give an outdoor atmosphere, to indoor living, with only glass shielding the occupants from the climate.

Utilizing solar heat, the building will have all-glass walls between concrete slabs supported by exposed vertical girders of a steel frame. There will be no corridors. Study rooms will open into a glass-walled interior terrace that may be opened to the climate in warm weather.

The front of the building will project into space without forward support. This cantilevered effect, the 'glass cage' entrance, floating steel stairway, and moving walls are but a few of the unusual characteristics of the building."

The following biographical sketch is from the Ludwig Mies van der Rohe Collection at the Ryerson and Burnham Archives of The Art Institute of Chicago:

"Born Maria Ludwig Michael Mies in Aachen, Germany, in 1886, Ludwig Mies van der Rohe received his principal architectural training through apprenticeships with several noted German architects. During the 1920s and early 1930s, Mies was widely influential in codifying the International Style through his avant-garde built and unbuilt projects, including the Glass Skyscraper, the Tugendhat House in Brno, Czechoslovakia, and the German Pavilion in Barcelona. In 1930, Mies van der Rohe was named director of the acclaimed Bauhaus School in Dessau, Germany, leading a faculty of progressive architects, designers, and artists. After the Bauhaus' forced closure in 1933, Mies continued in private practice, often collaborating with interior designer Lily Reich. In 1938, Mies van der Rohe was selected by Amour Institute of Technology in Chicago, Illinois, to radically reshape an existing architecture program and to design a new campus for the school. Through his position as dean of architecture, the architecture program at Armour--renamed the Illinois Institute of Technology [IIT] in 1940--Mies van der Rohe attracted students from around the world to study with him and several Bauhaus colleagues, including Ludwig Hilberseimer, Walter Peterhans, and László Moholy-Nagy. While teaching at IIT, Mies also maintained a private practice, in which he completed such noted commissions as the ... Seagram Building in New York City. After Mies' controversial dismissal from IIT in 1959, he continued in private practice in Chicago until his death in 1969."