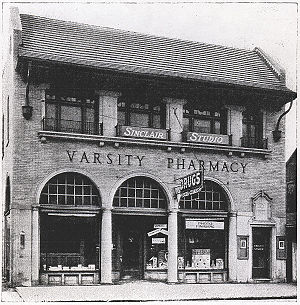 Lowe & Bollenbacher was a Chicago architectural firm that designed several buildings in Bloomington in the early 20th century:

The partners were Carlisle Bollenbacher and Elmo Lowe.

John Carlisle Bollenbacher was born in Bloomington, Indiana in 1884 and attended local schools, earning a degree in mathematics from Indiana University in 1906. In May of 1909, the Bloomington Telephone reported that he would soon graduate with honors from the architectural engineering department of the Boston Technical School, as the Massachusetts Institute of Technology was known prior to 1916.

Elmo Cameron Lowe was born February 26, 1876 in Richview, Illinois. He attended the University of Chicago for two years, followed by study at the Boston Technical School/MIT. He earned a degree in architecture in 1905. Lowe returned to Chicago and opened an office. Bollenbacher worked in Lowe’s office for some time before Lowe & Bollenbacher was founded. An announcement card sent to William Lowe Bryan, president of Indiana University, indicates the partnership began on September 1st, 1910.

During the early years of his association with Lowe, Bollenbacher split his time between Bloomington and Chicago and lived in his family’s home at 645 North College Avenue when staying in Bloomington. He was active in the Chicago chapter of the American Institute of Architects and the Illinois Society of Architects. Lowe was also active in the Chicago AIA. Both were made fellows of the AIA in 1931.

On August 1, 1924 Hoyt Granger joined the firm and it was renamed Granger, Lowe & Bollenbacher.

The firm was responsible for many buildings outside of Bloomington as well, including several churches and university buildings: First Evangelical Church in Chicago, 1922; the Hyde Park YMCA Building, Chicago, 1922; St. John's Lutheran Church, Wilmette, Ill., 1923; Kent College of Law, Chicago, 1923; Bryn Mawr Church, Chicago, 1924; and St. Paul's Evangelical Church Parish House, Pekin, Illinois, 1924. The firm also designed many residences and served as associate architects for James Gamble Rogers when he designed much of the Northwestern University campus in Evanston, Illinois.

Under the 'Achievement in Design' section of his Proposal for Fellowship in the AIA Lowe cited the Bloomington Monon Railroad station snd a 'Shop Building' in Bloomington, among others. The proposal included photographs of the structures, but these were returned to the applicant after the process was complete and are no longer part of the AIA membership file. The only known shop building in Bloomington designed by Lowe & Bollenbacher is the Varsity Pharmacy. Bollenbacher's Proposal for Fellowship cites Memorial Hall and the Kappa Kappa Gamma sorority house in Bloomington and the Indiana Limestone Co. Office Building in Bedford.