Knight Riots is the common name for the events that immediately followed the announcement of the Bobby Knight firing on September 12, 2000. It was a mainly student-led protest with no discernable organization or goals other than to voice their disagreement with the firing of Bobby Knight. At times, portions of the estimated crowd of 6,000 Knight supporters resorted to tactics of vandalism, assualt and verbal abuse.

After the announcement of the firing, fans immediately converged on the Assembly Hall south parking lot awaiting word from Knight. They waited for nearly six hours before Knight came out. When he appeared, Kevin Salzmann stepped forward with a bullhorn so Knight could be heard above the roar of the crowd. He said a few words to the crowd in support of the police that had been defending the University and its president from the more violent members of the crowd. His comments were brief and the crowd dissipated soon afterwards.

In addition to the waiting crowd at Assembly Hall, a smaller crowd with a higher ratio of students, congregated at the Showalter Fountain. The crowd had several chants of support for Knight, disdain for Kent Harvey (the student who many in the crowd believed wrongly accused Knight of assuault) and IU President Myles Brand. Students took turns perching atop the foundtains statues. In a less glamorous moment some of the female students perched on the venus statue lifted their tops as the crowd asked for "Tits for Bobby! <clap,clap clapclapclap> Tits for Bobby!". Around this point, the mob started to take more destructive measures. 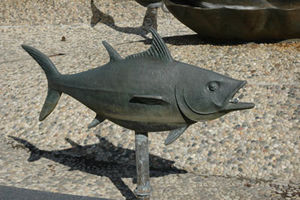 The fish that travelled

Their next target was one of the fish statues in the fountain. They initially carried to IU President Myles Brand's home. When the protestors saw a line of police in riot gear surrounding the house, they changed direction and decided to give the fish to Bobby. Along the way, they stopped in the arboretum after there was some confusion about their newly acquired goal. A decision was made to throw the fish into the lake, until someone in the crowd decided (again) to give the fish to Bobby. After the slight bout of amnesia, the crowd made it up up Fee Lane and deposited the fish at the south entrance of Assembly Hall. When Knight came out and the crowd hushed down for the first time to hear him speak (Kevin lent him his bullhorn), a voice in the crowd shouted "we brought you a fish Bobby!" and the crowd erupted. Knight didn't seem to understand, or care. The fish was recovered and put back in place in a few weeks time. Because the event was heavily recorded by students' digital cameras, IUPD posted photos of the students and asked for information leading to their arrest.