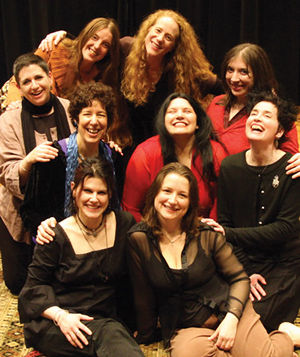 Kaia is not a touring group but has performed at a wide variety of local venues, including Farmer's Market, Second Story, and the Buskirk-Chumley. For the last several years they've mounted a major show as part of the Bloomington Area Arts Council Performing Arts Series. They've performed live on WFHB's Womenspace program and have been interviewed several times by WFIU.

Kaia has issued one CD, "Kaia Live! Spring 2006," which it sells on its website along with other Kaia merchandise. The Kaia site also features extensive information on the Kaia repertoire, photos, information about upcoming and past shows, and quotes about music.

Kaia is known for its wide-ranging repertoire, the eclecticism of its sound, audience participation, and occasional outrageousness. Committed to breaking the "fourth wall" of performance space, Kaia uses a variety of techniques to change audience members into participants. Their tagline is "a cappella world music from the raucous to the sublime."