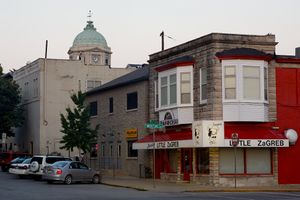 Janko's as seen from across the intersection.

Janko's Little Zagreb is a locally-owned steakhouse on 6th Street. Opened in 1972, the restaurant's small menu is focused on steak and its usual accompaniments. The restaurant was initially known as the "Choo-Choo Cafe" in reference to the nearby railroad track. It initially served Yugoslavian and Eastern European cuisine, but later focused on beef. It is well known outside Bloomington and has a reputation for serving the best steak in town.

The name of the restaurant comes from a nickname that the John S. Pouch's Croatian immigrant grandmother had for him. Zagreb is the capital of Croatia. The restuarant was initially owned by John Pouch's brother, Jeff, with John supplying the beef.

A longtime favorite of local celebrities John Mellencamp and Bobby Knight, the IU Athletics department brings a lot of their recruits to Janko's. Singer Billy Joel was quoted by the Herald Times in an interview with Mike Leonard in 1990:

"They still got that little steak house in Bloomington?" he asked. "Little Zagreb? I went there after we had a flag football game with (John) Mellencamp, which was an absolute slaughter. They must have beaten us 2,000 to nothing."

"He brought in a ringer from the university to play quarterback," Joel complained about Mellencamp. "But he was gracious enough to buy the steaks after the game. And I'd have to say that probably was one of the best steaks I ever ate. If that guy down there could figure out a way to send those things across the country I'd probably order 'em on the road."