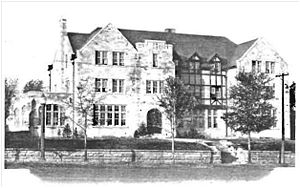 Frank Logan was an Indiana architect active in the early and mid 20th century. Born December 16, 1880, he earned a Bachelor's Degree from Indiana University in 1903 and a Bachelor of Science from Massachusetts Institute of Technology in 1906. He was associated with the firms Carrere & Hastings and Cass Gilbert before establishing his own firm 'Frank Logan, Architect' in Princeton, Indiana in 1940. He was a registered architect in both New York and Indiana. While associated with Carrere & Hastings Logan was the architect for:

Logan was a member of Beta Theta Pi during his years at Indiana University.