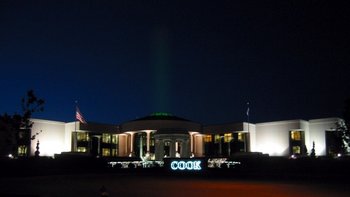 Cook is Bloomington's largest private business and is a maker of medical devices worldwide. Bill Cook started a company in 1963 to manufacture medical devices. As it grew it became a world leader in the field and created many subsidary companies to manage its operations. Cook Group is the holding company that manages all the subsidiaries. As of 2006, Cook employs more than 5,600 people worldwide. More than half of that locally.

In the mid-2000s Cook has been working towards unifying all their brands and separate companies to be "One Cook" so that they no longer function so much as seperate entities. They also launched a semi-internal pride boosting campaign in 2006 called "What is Your Promise?".

The Park 48 facility is the world headquarters of Cook and was built in 2002 at an initial cost of $65 million. The gazebo-like concrete column structure in the center of the fountain in front of the building is originally from the West Baden Hotel in Orange County. It was flown here and set in place by a helicopter. The domed attrium was originally inspired by the hotel as well. At night, the lights in the dome gradually changes colors between red, green, purple and blue. This is visible from the outside as well as inside.

Building E is the front office building while the 4 other buildings that it connects together are A, B, C and D (from right to left). Building D was constructed in 2006. All the lettered buildings have two floors while buildings A, D and E also have basements. The warehouse building is in front of the main facility and sits on the corner of Zenith Drive and Daniels Way. On the east side of the front parking lot you can see the word Cook spelled out in the rock wall. The main entrance has a giant brass and marble compass on the floor. It is probably the largest main lobby to any building in Bloomington.