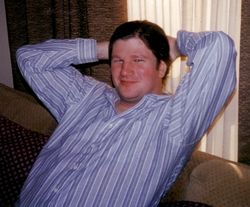 Chuck was born in Anderson, he was the son of Charles and Mary Stringer. He attended Ball State and lived in Indianapolis before moving to Bloomington in 1988. He worked for Pizza Express for a few years, then hired on at Indiana University in the University Computing Services Support Center and worked there until 1998. After that, he and his life partner, Suzanne O'Connell, moved to Chicago.

Bloomington was where Chuck's heart was, though, so he and Suzi returned in 2001. He then became manager of Information Systems at the Center for Behavioral Health.

In 1993, Chuck founded the British Motorcycle Enthusiasts mailing list Brit-Iron, which boasted members on all seven continents at one time.

Chuck was a writer in his spare time, though he kept his work very private.

There is a Find A Grave memorial page for Chuck which includes his obituary.