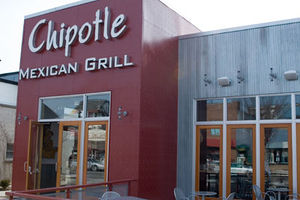 As seen from the sidewalk out front

Chipotle opened on Kirkwood Avenue in 2005. It was previously the location of the McDonald's on Kirkwood, which was closed after financial trouble as the result from the Big Dig of 2000 on east Kirkwood. It has been doing significantly more business since the property switched to Chipotle.