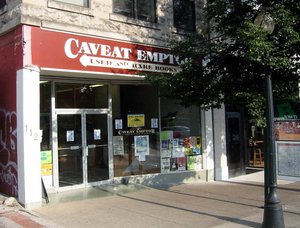 Caveat Emptor is a used bookstore located at 112 N. Walnut Street, on the east side of the courthouse square. Their hours are 11AM to 9PM Monday-Saturday and Noon to 5PM on Sunday, but as the sign on their door indicates they are "often open late". The staff tends to be helpful and enthusiastic about helping any customer find a book they might have stashed away somewhere in their overflowing collection of tomes. Their collection is very eclectic, containing books of fiction and non-fiction from a plethora of genres, and most books are for sale at a cost 1/2 that of the same books would be new. Many out-of-print works or other rare volumes can be found amongst the horde.

Caveat Emptor is one of Bloomington's oldest and few remaining used book stores. It got started sharing a building with a copying company, moved briefly to a location on Dunn Street, and finally came to rest at its current location on the courthouse square. At first the store had a comic book counter, which still exists today in the form of Vintage Phoenix. The store also used to carry records, which were dropped. They do, however, have a collection of used CDs in addition to the myriads of used books.

Owner Janis Starcs is also a well-known music-lover and concert goer, whose name can be frequently heard on WFIU's musical call-in show Ether Game, in which listeners call in to identify selected musical works, mostly from the Western European musical canon.