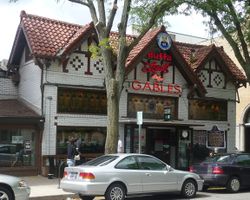 The first building was demolished in 1914 and the current brick building with the gabled facade and white enameled brick was built in it's place. it is purported that Hoagy Carmichael wrote the notes of Stardust at the piano in this building. Nichols & Nichols were architects for the second building.

Four Book Nook Commencements were held between 1927 and 1931. In 1931 Herman Wells, future president of Indiana University, was awarded a Doctor of Nookology degree.

The IU Foundation bought the building in 1979 and has leased it out to several other restaurants, including another Gables restaurant, which was owned by Max and Linda Wildman and operated from 1997-2001.