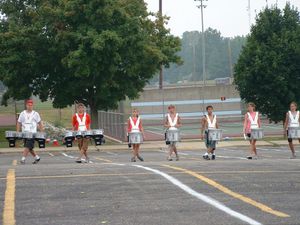 The Bloomington North Drumline is a section within the Bloomington North Marching Band consisting of the percussive instruments of the band. They compete in Class B ISSMA competition, often placing well. They most recently placed their best ever this past year with a 5th place rating at the 2006 ISSMA State Finals, beating some of their closest rivals and one of the three best bands in the state. The line along with the band has also been on many trips and performed in special parades across the nation.

A drumline is a group of several percussionists either holding marching drums, such as bass and snare, or the pit, with such instruments as marimbas and timpani. The origins of such lines go back to the revolutionary war when drummers used to march with the soldiers to keep the tempo. In today's modern drumlines the idea is the same, using the drums to maintain tempo. This, however, has evolved into far more complex and difficult patterns and rhythms as well as marching styles. The battery, or the players that actually hold the drums, consist of three types: Bass drums which are low drums used to keep the bass of the melody often in groups of five different pitches; Tenor drums which consist of a set of five higher pitched drums carried by one member of the line, also called quads or quints; and snare drums which are single high pitched drums used as the main tempo keepers for the whole band. Many groups also incorporate marching cymbal players into the battery. Instruments like xylophones and timpani, which used to be harness mounted instruments as late as the early 1980s, became too cumbersome and so the concept of a pit was developed, much like an orchestra pit for an opera or musical. The pit contains many instruments including everything from the traditional marimbas and xylophones to bass guitars and train whistles. Together these groups make the drumline and are truly the heart of the band.

At Bloomington North, the line is steeped with a long tradition of musicianship and brotherhood. The line along with the rest of the band has placed 10th, 7th, 6th and finally in 2006 has reached the best results ever, placing an astounding 5th at ISSMA class B Finals. They also traveled to California in 1999 to take place in the Rose Bowl Parade, to New York in 2003 to play in the Macy's Parade, and most recently to Philadelphia to play in the Boscov's Thanksgiving Day Parade, where they stole the show. At the parade they premiered their new cadence “Rockabye Nunchuck” written by the drumline's new instructor Steve Such.

The staff of the drumline is a fine mixture of veteran teachers and newcomers. Some past instructors include the famous Jim Bailey, Leader of the Cavaliers and multiple other drum corps throughout many years as well as Pat Macgowen, the only Quad player ever to be captain of the Cavaliers. Joel Brainard, captain of the Indianapolis Independent drumline and member of the Blue Knights for many years, served as caption head for four years. The current leaders include: our battery tech, Steve Such, a sophomore at Indiana University as well as a snare on the Marching Hundred, and the Pit leader is Kirk Etheridge, a sophomore at IU. Dave Scimonelli is has spent three years at North, two as Battery Tech and is now the caption head, or overall leader. He is a graduate of the University of Dayton and is currently getting his doctorate in music education at IU.

The line, steeped in their many traditions, remain the outsiders of the band. This is not because of a lack of coolness or charisma, but because of a lack of understanding of the traditions by other band members and a feeling of superiority in the drumline. This leads to disconnectedness from the band but makes up for this by allowing a strong connection in the line. These traditions keep the line together as a family and a mystery at the same time. In the last days of band camp a time comes were all the sections decide on their respective themes for the final day. They all dress alike and have fun, but the drumline in their attempt to be different decided one fateful day many years ago that instead of dressing alike, they would undress alike, going the entire day in nothing more than boxers. The event has remained a tradition, getting the kids in trouble for public indecency three of the past four years. Another tradition is the eating of breakfast at Denny's. Nearly every Saturday, before a big contest, the drumline meets for breakfast and to share in a family style meal. The most common menu item is the Lumberjack Platter, made popular by former leader, Joel Brainard, known for his lumberjack-esque appearance.

There are many other traditions such as the use of Gold Bond and the wearing of a “band” necklace but all other traditions pale in comparison to the tradition of Tang. Tang was first discovered as a treat by a former a quad member. He was eating out with a lady and was disappointed with the taste of his food. In order to spice it up, he added powdered Tang. The idea caught on and soon the whole line was eating tang in powdered form. Finally, they made it official. Before every show the drumline members make a circle. Then they dedicate the show to something meaningful and finish it by eating a mouthful of the powdered tang. This is widely seen as good luck and the most important bonding moment of the line.