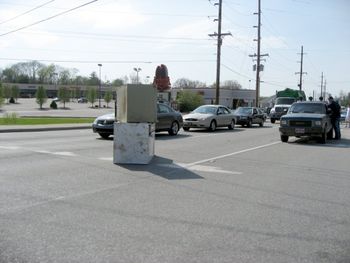 The following is speculation as to what happened. It appears that this accident occured when two large appliances (probably refrigerators) fell from a truck just before the intersection of SR 46 and Smith Pike. A red Jeep and a blue sedan were close behind and ended up in a rear end collision. There may have been another vehicle involved. Later around the time the police came, a small pickup truck stopped by and started setting up what appeared to be ad-hoc equipment to load the appliances back up.