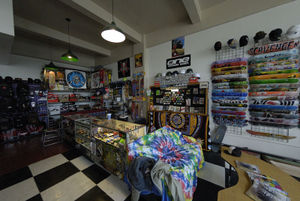 Mr. Bob's Amused Clothing was one of the original skate shops in Bloomington. Since it opened in Bloomington in 1991, Amused provided a wide variety of new and vintage clothing, skateboards and skateboard hardgoods, Sector 9 longboards, Tapestries, mucklucks, Nagchampa and other fine imported incense, hookahs, Starbuzz hookah tobacco, and used vinyl records. It also provided a wide selection of skate shoes including Adio, Emerica, Es, Osiris and DC. In addition, Amused offered many other strange and interesting marvels of the 20th century, such as locally made hand-blown glass smoking accessories. Some say that it is the premier location for such items in the state of Indiana.

It was located at 212 W. 4th Street, Amused moved to this location in August of 2006 from its old home at 208 S. Dunn Street. There is also a location in West Lafayette.

Amused features vaporizers of all kinds including Volcano vaporizers, Digi-Vape, and portible vaporizers such as the Vapor Genie or I-Inhale. Amused also carries a radical array of waterpipes from providers such as HVY, Left coast, and NL5. Amused currently offers Bulk Incense at the standard rate of 20 sticks for one dollar, giving Amused the best customer value on incense in the mainland United States. Fun things to do at Amused include playing games of skate in the street, getting great deals on headdy glass, and finding some of the more fun and bizarre fashions and traditions known to the community.

Amused Clothing has given many jobs to skateboarders and students. Bob has a tight crew of hard working individuals like Keddy McClain, Jake Kilar, Trent, Kelly, Dill, Satish, Jason and Ian. Most of Amused's employees are skaters, some of whom are sponsored by Amused Skate shop. Younger sponsored skaters are also given small jobs or chores in exchange for store credit, often involving a great deal of skateboarding back and forth from Taco Bell. The skateboard team does live events and contests such as the popular Philfest 09' held at the Bloomington Skate Park in August of 2009. Philfest was centered around three different skateboarding events vs. Phil, live music by local hip-hop artists 2mics and a kit, Elephant Quiz, and a White Castle eating contest.

Many know Amused as being one of the best places in town to network. Canvasses are available for sale by Sk8ter Jake, who introduced his new line of characters at Amused. The store is also home to artwork by Joel Washington, Chris Markovich, Jetone, Brisk, and others from the underground art/skateboarding community. Amused features handmade blown glass creatures by Kemp Curtis.

Amused generally has two big sales each year, in April and October. These sales usually last from 4 days to a week, with discounts from 15% to 50% on all items storewide. At these times, the store often calls upon the talents of the local pool of glassblowers to construct promotional/functional artwork which is offered for some sort of game. This is strictly a promotion and is always a fun way for someone to win an object so outlandish one could never, or would never buy one for oneself.