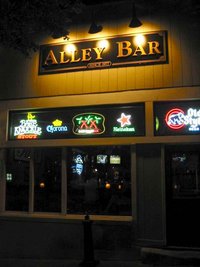 In its original incarnation, the Alley Bar existed to serve graveyard-shift workers at the now-defunct RCA factory on S Rogers St.

This fact was reflected in the Alley Bar's unusual early-morning hours of operation, as well as it's selection of libations, in which canned beers predominated.

Recently the Alley Bar has been renovated, and its hours of operation more closely resembles other area bars.