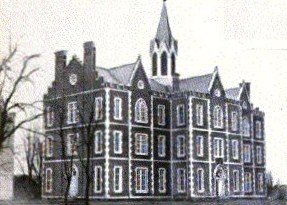 Science Hall was an Indiana University building on the original Second Street campus. It was built in 1873 and destroyed by fire in 1883. B. V. Enos was the architect.

When the original Second Street campus was chosen the Louisville, New Albany and Chicago Railroad (later the Monon) did not exist. In 1852 its tracks were laid immediately to the east of the campus (the right of way is now the B-Line Trail). The railroad brought noise, sparks and coal soot. The loss of Science Hall prompted the search for a new campus. Ultimately land was bought from Moses Dunn on what was then Bloomington's eastern edge and Wylie Hall and Owen Hall were built.

A second Science Hall was built on the Dunn campus and later renamed Lindley Hall.