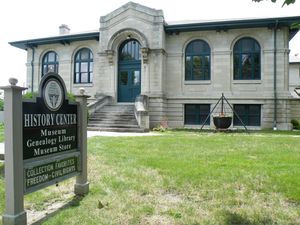 The Society is dedicated to the preservation and exhibition of the history of Monroe County.

The mission of the MCHS is to foster a deeper understanding and appreciation of Monroe County's history, culture, and natural environment by all. To accomplish this purpose and mission, the MCHS will collect, preserve, research, interpret and exhibit the genealogy, history and artifacts of Monroe County, Indiana as well as research and interpret the relation of that County's genealogy, history, and artifacts to the State of Indiana and the United States.

To accomplish this purpose the MCHS shall at a minimum operate a museum, a local history library, and a museum store.

On April 18, 2002, the Society approved new By-Laws joining the previously separate boards and finances of the Monroe County Historical Society (Board of Directors) and of the Monroe County Historical Society Museum (Board of Governors). The newly jointed body is known as the MCHS Board of Trustees. Previously the Society had been the parent organization of the museum and the museum had had its own separate board and finances. 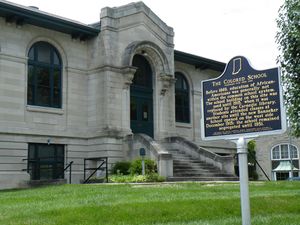 Center School operated on the site at east 6th Street and Washington Street from 1854 until 1913. Originally used by white students, it became the home to African-American students in Bloomington in 1881 and became known as the colored school. In 1913 the Andrew Carnegie Corporation awarded a $31,000 grant to the Monroe County Library Board for the construction of a public library. Work began with the demolition of Center School in 1914. The African-American students were moved to the Catholic School on 3rd Street and College Avenue until the newly constructed Banneker School was finished.

In February 1918 the new Bloomington Public Library opened its doors to patrons with 6,439 volumes. The building would serve the needs of county residents for the next 52 years. Following the completion of a larger, more modern, library facility on Kirkwood Avenue, the Library Board closed the Carnegie Library building in 1970. 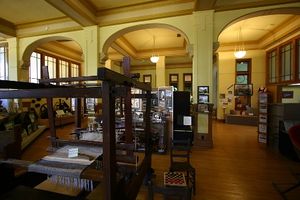 A view of the Gayle Cook Main Gallery.

The future of the old library remained uncertain until 1978 when The Old Library, Inc. (TOLI), a nonprofit organization created to restore and maintain the building, purchased the site from the city. TOLI renovated the old building and by 1980 other nonprofit organizations such as the Bloomington Area Arts Council and the Monroe County Historical Society leased space for their operations. In 1981 the Society’s Genealogy Library moved in.

In 1994 TOLI dissolved and subsequently sold the building to the Monroe County Historical Society for $1.00. Following the successful completion of the Build History fundraising campaign, the Society added an additional 12,000 square feet to the old library building in 1997-1998. Reopened in September 1998, the facility now boasts four exhibit galleries (consisting of 8000 square feet), an expanded genealogy and local history research library, a museum store, an education room, and climate controlled storage.

In short, 202 East 6th Street has been a land set aside for learning for over 150 years.

For a full listing of events and current and upcoming exhibits, please visit the History Center's website at www.monroehisotry.org.

Staff, Officers, and Board of Directors 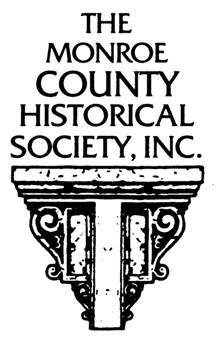 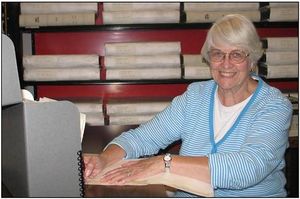 All Genealogy Library research is assisted by a volunteer.