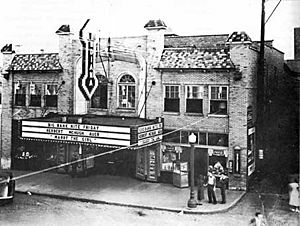 The Indiana Theatre was located at 114 E. Kirkwood Avenue, just off of the courthouse square in downtown Bloomington.

This theater was originally called the Indiana Theatre and was built in 1922. Originally, it featured a mix of vaudeville and silent movies. The famous local musician, Hoagy Carmichael, played at the Indiana.

In 1975, the Vonderschmitt Family sold the Indiana to Kerasotes Theatres. They closed the upper balcony and put in a second screen. Years later, Kerasotes closed the Indiana and vowed that movies could never be shown there again. In December 1995, Kerasotes gave the theatre to the Bloomington Area Arts Council, who then restored it and reopened it in 1999 as the Buskirk-Chumley.

An article in the Bloomington Evening World in 1922 had this to say:

Work will be started this week by the Bedford Steel & Construction Company on the foundation for the new theatre to be erected on East Kirkwood Avenue by Harry P. Vonderschmitt of Washington, Indiana. There were four bidders for the job. The contract calls for the completion of the building in 90 days.

The Washington Democrat of Saturday says: "The building is to be 66x132 feet and will have a seating capacity of 1,500. There will be two storerooms in front, already rented, and four office rooms on the second floor. Harry Palmer of this city will be the manager of the moving picture theatre Mr. Vonderschmitt will open in the new building.