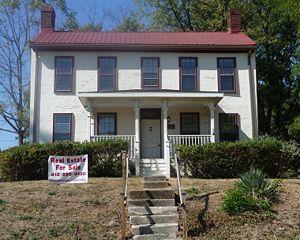 The Henderson House at 748 S. Morton Street is one of Bloomington's oldest homes, dating from around 1835. It is easily visible across the street from the B-Line Trail.

A plain, Federal-style farmhouse, it originally held two rooms downstairs and two rooms upstairs. Later a lean-to and the current front porch were added, and more rooms inside were created by partitioning.

It was once home to Baynard Rush Hall, one of the first professors at what is now Indiana University.