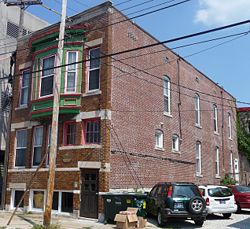 The Gentry Building faces Gentry Street. It currently consists of three stories of apartments over an empty half-basement business space. It is owned by Olympus Properties. It was built in 1913/14 as an addition to the Benckart bakery building that faces on College Avenue. The southwest corner of the addition has dropped a great deal in the past 20 years, likely due to a large brick oven. Removing this oven slowed the sinking of the southwest corner, by lightening the structure significantly.

According to the American Contractor, December 13, 1913, the addition was designed by Nichols & Nichols. The general contractor was J. O. White. The March 14, 1914 edition reported that the foundation was complete, but construction had ceased during the winter. The general contractor was seeking bids for the electrical sub-contract and work was to begin again soon. This technique of building the foundation in fall and letting it 'settle' over the winter is often an indication of a shallow foundation. If true, this could contribute to the settling of the southwest corner.

This building is not to be confused with the Original Gentry Building at the corner of Kirkwood and College.