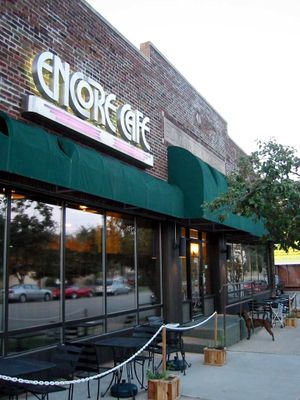 The Encore Cafe was a cafeteria style restaurant on west 6th Street which offered made-to-order sandwiches, a wide variety of prepared dishes (which always included vegetarian dishes), and an excellent selection of desserts. Beverage selections always included mineral waters, wine and beer, and in the later years espresso drinks.

The Encore had been in business on 6th Street location for 10 years, but changed proprietorship in May of 2002, when the business was purchased by Bloomingfoods. The original owner wanted to sell the business, but wanted a buyer with strong ties in Bloomington. Bloomingfoods members and customers had long said that the Coop should open a restaurant, so the Coop investigated the idea of buying The Encore. The seller was happy with Bloomingfoods as a buyer, and The Encore was an excellent fit with the Coop's goals.

The Encore was frequently a gathering place for various local clubs and student groups. One of these clubs was the Bloomington Photography Club.

On July 5th, 2006, it was announced that Encore Cafe would close and re-open as a Bloomingfoods grocery store. The owners remained the same. Lack of solvency was cited as the reason for the closing