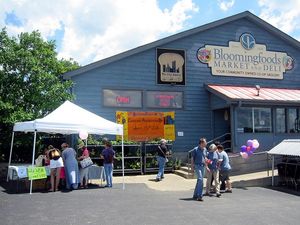 All three locations feature both a market, and delis with seating, serving a variety of prepared foods. Bloomingfoods offers a large selection of foods for those with food based allergies

The west side store is the site of the former Encore Cafe, which the co-op acquired in May 2002 and continued to operate until November 2006. The cafeteria was running at a loss and the co-op board decided that this was hurting the other activities of the co-op and converted the business to a grocery[1]. A deli and cafe seating still provide in-house and outdoor dining.

Membership consists of purchasing a share that costs $90, quarterly and monthly payment plans are available.

Bloomingfoods also operated the Theater Cafe at the Buskirk Chumley Theater from September 2002 through the Fall of 2006. The location is now the home of BLU Boy Cafe and Cakery.