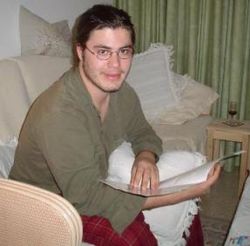 Christopher Soghoian (b. 1982) is a PhD student in the School of Informatics at Indiana University in Bloomington.

He is a security researcher and created a tool that allowed people to create their own boarding pass for Northwestern flights. He released it to the public on October 26th, 2006 and although his intentions where to show flaws in the security of the airlines, congressman Edward Markey (Dem-Mass) called for his arrest. In the security world, it is commonplace for security researchers to announce their findings of vulnerabilities to the public if the software creator does not respond to such issues.

This event made national news.

On Friday October 27th, 2006 and 3:50pm the FBI paid a visit to his apartment and handed him a written order to remove the website containing the boarding pass generator. On October 28th at 2am the FBI ransacked his apartment and took his computers.

In mid-November, all charges against Chris were dropped due to lack of evidence of criminal intent. Chris' passport and computers were returned to him. He was a bit upset though because so far there has been no change in airport security.

Beginning in September 2007, Chris is writing a blog for CNET entitled Surveillance State.