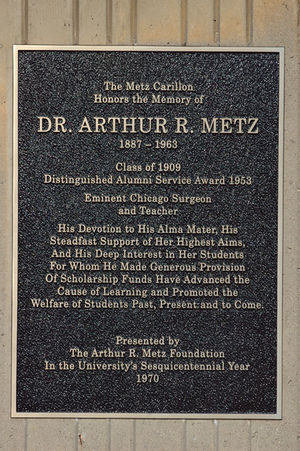 The Dedication plaque for the Metz Carillon

Indiana University was home to a 61 bell carillon housed in a campanile (tower) near the intersection of 17th Street and Jordan Avenue. The instrument was maintained by the Jacobs School of Music, but was rarely played.

The original tower and instrument room were built upon the highest point of the Indiana University campus and were designed by Eggers and Higgins with Wright, Porteous and Lowe as associate atchitects.

In 2019, as part of the University's bicentennial, the carillon underwent "renovation and relocation", a process that was completed in December of that year. The bells were relocated to a new structure in the Arboretum near Fee Lane and Tenth Street. Four bells were added to create a grand carillon. Architects for the new structure were Susan Rodriguez, of Susan T. Rodriguez Architecture and Design of New York in collaboration with architect Jonathan Hess of Browning Day Mullins Dierdorf of Indianapolis. The new structure bears some resemblance to an alterrnate design from 1966 by Eggers and Higgins.

The original 1970 structure was demolished as part of the 'renovation and relocation' project.