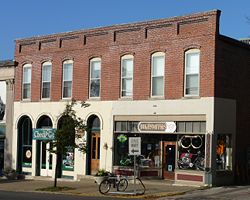 George Benckart ran a bakery and restaurant and his father worked as a tailor in the second story of the previous building that stood on the site. Benckart purchased that building in 1886 and had only just paid off the loan when it was destroyed by fire in November of 1888. The fire also destroyed the Orchard House immediately to the west. Both Benckart's bakery and the Orchard House were a total loss. The Orchard family had no insurance and the inn was not rebuilt. Benckart suffered a total loss estimated at $6,000 with only $700 insurance, but was nonetheless able to rebuild in the same location. Wilson Adams was the general contractor. Construction was delayed by a shortage of bricks but Benckart was reported back in business on the site in late October 1889.

Benckart acquired the Orchard House site in 1892. In 1914 he built an addition to the bakery, now known as the Gentry Building.

Specialties of the bakery were salt rising bread, angel food cakes, homemade ice cream and doughnuts for 10 cents a dozen.

Benckart operated the bakery until ill health forced him to sell in 1928.