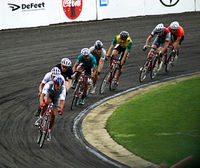 The Little 500 (a.k.a. Little 5) is an annual bicycle race held at Bill Armstrong Stadium on the campus of Indiana University. It has been running since 1951 and is one of the most definitive events of Indiana University and Bloomington. It was dramatized in the Oscar winning movie Breaking Away in 1979.