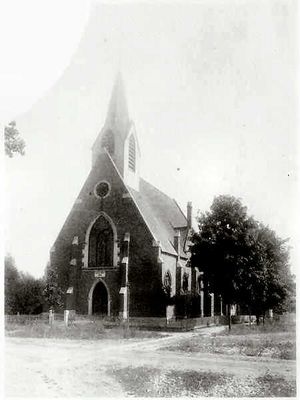 St. Charles Borromeo Church was established in 1864 when the visiting Reverend Charles J. Maugin oversaw the purchase of a church building for $600 from a Methodist congregation. This initial church was located on the corner of 4th Street and Madison Street. A rectory was built on the same lot in 1868. By 1878, the church building was no longer safe for use and it was razed.

On September 12th, 1878 the cornerstone was laid for a new $5,600 church. The first mass was celebrated in this building on December 4th of that year. This location and building continued to serve for the congregation until 1922.

OnJune 25th, 1922, the church moved to a new property located at the intersection of East 3rd Street and Dunn Street. A school was also constructed on this same property. This property served the congregation for 30 years.

On May 5th, 1952, the church moved to its current location at the intersection of East 3rd Street and High Street. In 1957, a school was added to the property, and an expansion of the school was completed in 1996. The church and school play host to the annual 3rd and High Festival.