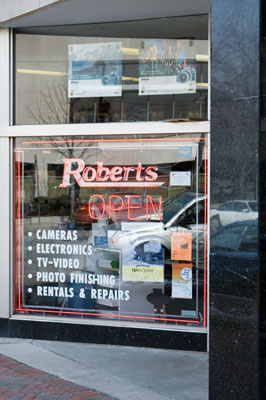 In recent years, Robert's has become a well-known online e-tailer on the national scene. Orders are shipped out of the Indianapolis Store. Because Robert's is price-competitive in the online scene, Bloomington residents were able to share in the low-prices traditionally afforded to online purchases. Robert's transfered merchandise between their stores at no charge. Typically this had a 1-2 day lead time.

Robert's Photography announced on January 15th, 2008 that they would be closing the Bloomington store, the last day of business was February 29th, 2008. Any leftover stock was to be moved to the downtown Indianapolis location.