Nick's English Hut is a long-time popular student and resident hangout on Kirkwood Avenue. Its walls are adorned with memorabilia from famous visitors including past IU alumni, writers, poets, and musicians. It has been featured in many national magazines as one of the most important Bloomington landmarks to visit. It's signature dish is the stromboli. 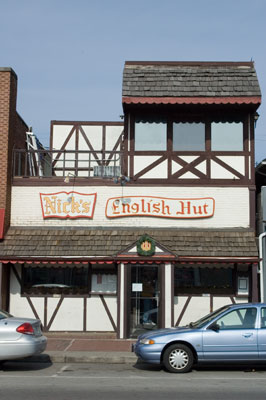 Nick's as seen from across Kirkwood Ave.

Nick's was opened in 1927 by Greek Immigrant Nick Hrisomalos. After Prohibition, the tavern acquired a liquor license in 1933. It was sold to Dick Barnes in 1957 and remains family-owned.

Nick's history was documented by Bill Weaver in his 1990 book "The College of Beer: The Story of Nick's English Hut" (Pound Press, Bloomington).

Nick's long-tenured server Ruthie Collier passed away Dec. 10, 2011 at the age of eighty-four.

For bigger appetites, try the Italian Beef sandwich. The au jus is well seasoned and the sandwich is big enough to share.