The forgotten south-central Indiana community is located in a seven mile wide band along the Monroe and Greene County line. It includes roughly the vicinity between the towns of Elwren, Stanford, and Buena Vista in western Monroe County; and Hendricksville, Solsberry, and Hobbieville in eastern Greene County.

Originally settled between 1816 and 1839, archaeological relics remain throughout the community. Hand hewn sandstone cornerstones and foundations sometimes remain. Yellow poplar wood was popular in the area to construct barns, cabins, and later, frame houses. These relics include sandstone, limestone and iron ore mines as wells the Randolph Ross and Sonís Virginia Iron Works blast iron furnace (1839-1844), including the cast iron gear by which the blower was operated.

The Greene County Chapel United Methodist Church located just west of the Monroe-Greene County line was started in 1834 when a group of neighbors from Calvert County, Maryland came to Indiana and settled in Beech Creek Township. The community where they settled became known as Maryland Ridge, and the worshipers called themselves the Calvert Society. 6 families made up the group; Gardners, Bakers, Whaleys, Carmichaels, Breedens and the Fowlers.

The Calvert Society met in homes until a log church was erected in 1839. The land was deeded to the trustees; John Gardner Sr., Samuel Hite, Cleverly Day, Isaac Gardner and Moses Whaley. The deed said it was to be called the Methodist Episcopal Church. The early preachers were Circuit Riders usually getting there every 3 weeks. When there was no preaching, class meetings were held after Sunday School. Class leaders were: Isaac Gardner, Thomas J Baker and William A Whaley. Thomas J Breeden was a Circuit Rider and a local member. 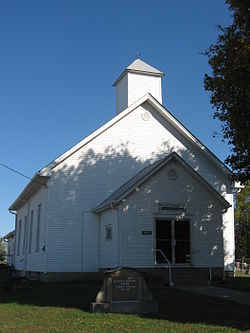 Immigrates to Indiana having family ties to Calvert County Maryland include:

The area currently lies near the path of the I-69 extension southwest of Bloomington.