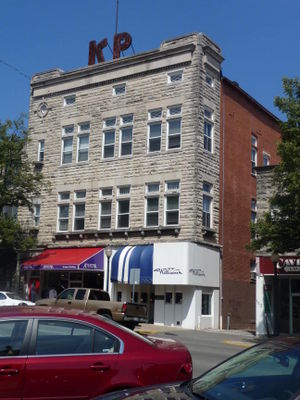 The Knights of Pythias Building at 114 and 116 North Walnut Street is a large, Free Classic building designed by John Nichols in 1903 and built by contractors Murphy & Eaken in 1904. An early photograph of the building is available at the website of the Monroe County History Center. Currently Seaview Outfitters and Athena occupy the first floor. Williams Jewelry previously occupied the outfitters space for more than 80 years. Prior to the building's opening, the Knights had met above the Hoosier Hardware Store on the north side of The Square.

Earlier businesses in the building included Timberlake's Cigar Co. and Bowling Alley in 1916, and the Vermilya Pharmacy in the 1920s, which later became the Rexall Drug Store. Southern Sporting Goods then took over the space, later becoming Athletics International.

The building was renovated by owners David Ferguson, John Seeber, Tom Seeber and Randy Cassady in 1999. It has two limestone Greek revival columns on the upper floors and original wooden, double swinging doors on hinges with original hardware. A wide stairway is the main entrance to the building.