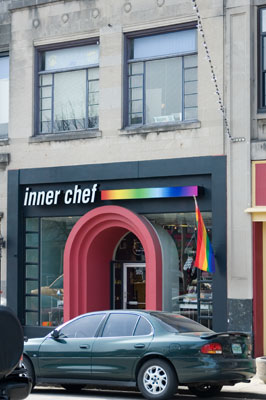 As seen from actoss College Avenue

Inner Chef was a cooking supply store on the Downtown Bloomington Square. It was started in August, 2005 by David Wade and his partner Stephen Chambers, following an attempt to purchase near by Goods for Cooks. The innovative art gallery/boutique format was created following a careful examination of existing cooking supply stores.

Inner Chef was the subject of vandalism in late 2005. The owner, an openly gay man, flies a rainbow-colored gay rights flag outside his storefront. On one evening, two teenagers tore the flag down and defiled it. The teenagers turned themselves in and claimed they didn't know it was a gay rights flag, but were more concerned that it was a desecration of the American flag. Regardless, the controversy was widely reported and Inner Chef saw a spike in sales as patrons flocked to the store as a show of solidarity.