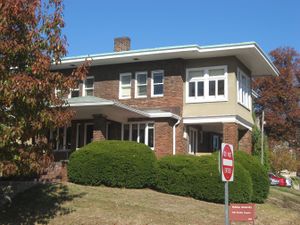 800 E. Eighth Street is a Prairie Style House that was originally situated at the northwest corner of 8th Street and Woodlawn Avenue. The house was moved in the spring of 2015 from 825 E. 8th Street in order to make room for construction of the Phi Gamma Delta fraternity house. It was originally and is still located in the University Courts Historic District. The house was built in 1921 by Ewald O. Stiehm. Stiehm engaged architect Alfred Grindle to design the house, but took bids and supervised construction himself.

Stiehm died in 1923 and the house was then used as a sorority house for about seven years before reverting to a residence. In the early 1950's it was referred to as 'Wellborn Hall', named after a resident owner of the 1930's. It is currently owned by Indiana University.