Collins LLC as seen from 9th Street and Park Street

Collins Living-Learning Center (CLLC) is the oldest residence hall still in use on campus. The main group of buildings (Edmondson, Cravens, Smith) are located across from Woodlawn Field on the southwest corner of 10th Street and Woodlawn Avenue. These three structures (Edmondson, Cravens, Smith) are built in the architectural form of "[t]he Tudor-style [and have an interior comprised of] traditional wood [panels] ... and cozy fireplace lounges [which are believed to] contribute to the small-college atmosphere." (http://www.indiana.edu/~llc/about/) An auxiliary site was comprised of two buildings (Brown, Greene) located on Woodlawn Avenue just north of 11th Street behind the School of Informatics. The director's and adviser's offices are located in the Collins Annex, a small house at the corner of Park Street and 9th Street. Collins LLC also includes Hillcrest Apartments located at the northwest intersection of 10th Street and Fess Avenue.

Collins LLC began as Washington Hall dormitory, built in 1924. It was the first dorm owned by the university, and housed only men until 1968. Washington Hall was later renamed South Hall in 1925. In 1940, West Hall and North Hall were built, and the three dorms were collectively named the Men's Residence Center, or MRC. However, during World War II, the MRC was commandeered by the US Navy, and used largely as a troops barracks.

In 1959, North, South, and West were renamed Cravens, Smith, and Edmondson halls respectively, and rededicated in 1961. The Living-Learning Center was created in 1972 at the dormitory as a student-led effort in response to the University seeking to take over the buildings to be turned into office space like the buildings in the Agnes E. Wells Quadrangle. In 1980, the center was named the Ralph L. Collins Living-Learning Center, and was dedicated on April 2, 1981. 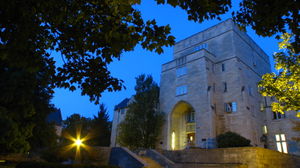 Collins (including Hillcrest and the annex) houses around 600 students a year, with an average of 400 students in the three main buildings (Edmondson, Smith, and Cravens). Housing in the main dormitories has become increasingly competitive because of proximity to campus, Edmondson's Traditional Dining, and various community events.

Collins has a higher ratio of College of Arts and Science majors than any other residence hall. In the past, and the community encouraged 2D art projects as decoration for the interior of the three main buildings, such as the Calvin and Hobbes comic strip which wraps around Smith's Floor 2 lounge and the recently added orange and black city scape decorating the hallway leading to Coffee House and Cheshire Café.

The Collins courtyard formed by Edmondson, Smith, and Cravens is the site of many large community activities and serves as a gathering point for socialization. 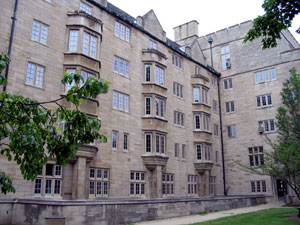 The Edmondson building is the largest of the Collins structures, housing the Traditional Dinning Hall as well as the Collins Formal Lounge, Coffeehouse (which, in actuality, is simply another lounge and performance area) and the Chesire Café. It has a basement with a large classroom and small laundry facility, and five floors above ground: two public, three residential, and one devoted to the Collins Library (located on the fifth floor). Between the Smith and Cravens buildings, Edmondson is the site of the Duty Office, Student Government Office, and Main Desk, all located on the first floor. The Traditional Dining hall has the most vegan and vegetarian alternatives of any dining hall on campus, and has buffet-style dinner and brunch every Monday to Thursday with just brunch on Friday and Sunday.

Edmondson has three pianos, one grand in the formal lounge on the first floor, one upright in the Coffeehouse on the ground floor, and another upright in the basement classroom. The Cheshire Café on the ground floor maintains a wide variety of beverages and is unique in that it's the only dining establishment in University Residence Halls that is independent from Residential Programming Services, meaning it does not accept meal points. The Collins Library on the fifth floor is one of five RPS libraries on campus. It has a variety of books, music, films, graphic novels, and magazines available for rent with a student ID.

Smith is the most southern of the three main buildings, closer to 9th Street than 10th Street. It has a ground floor which is half residential, half student-facilities. It houses the Collins main quad computer lab and printer station, as well as a full kitchen and laundry facilities. Smith ground lounge also has the only public television in Collins main quad. Smith 1, 2, and 3 are residential floors. Smith 1 lounge opens into the courtyard, and has an upright piano. Smith has burned down twice in its history, so while its exterior matches the Edmondson and Cravens buildings, its interior has a more modern steel, plaster and concrete construction than the wood-paneled Ed and Cravens interiors.

Cravens building has a basement with two classrooms and a sufficient laundry room, and four residential floors above ground. There are two lounges on Cravens 1, but no lounges on floors 2-4. 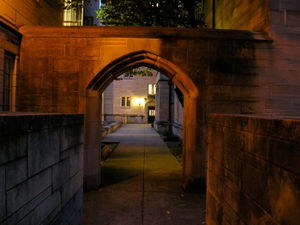 The Collins Annex is comprised of two buildings, both former residences on the corner of 9th Street and Park Street. One has been renovated for use by Collins advisers and staff, and the other is essentially abandoned, though it used to be the home of Collins' radio station. The functioning Annex building is home to the director of Collins' office as well as the Collins ceramics studio and visual arts studio. The Collins archives are now housed within the Annex, as well.

Brown and Greene buildings were located on the Hill, north of the School of Informatics but south of the fire station on Woodlawn Avenue. They were almost entirely comprised of singles. Brown housed the Collins recording studio, video editing lab, publications studio, photography lab, Collins Cinema, lounge (equipped with a television and piano), and a small clubhouse area equipped with a pool table and air hockey table. Brown and Greene were demolished in 2015 and Luddy Hall was built. 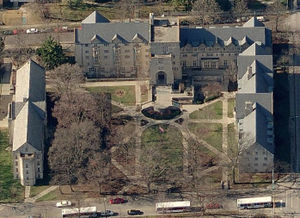